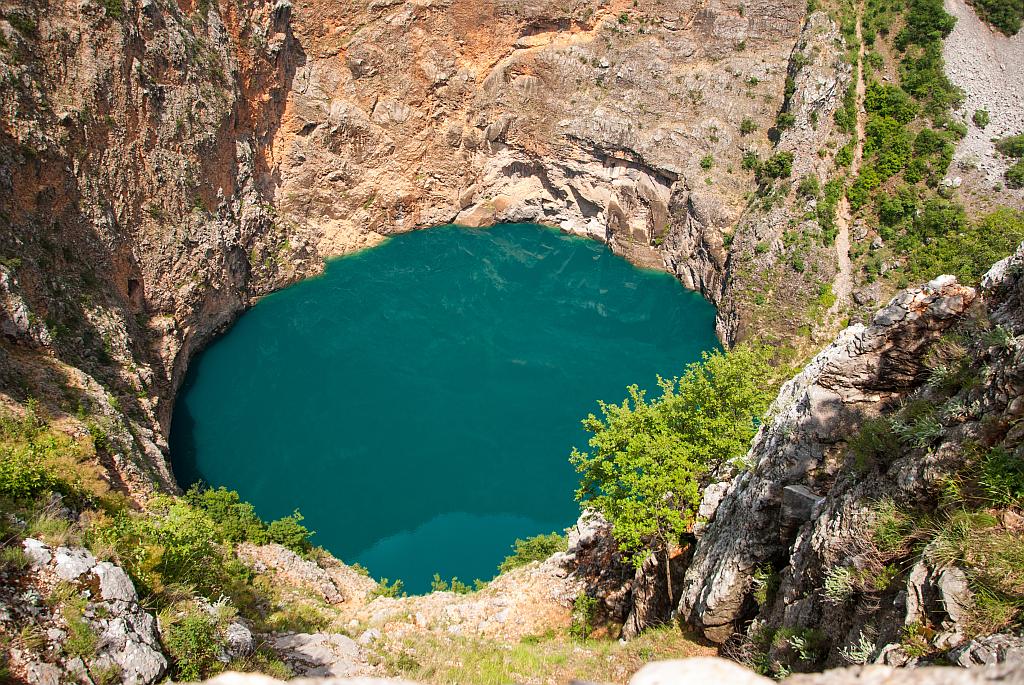 Imotski is a charming little town, located on the northern side of Biokovo mountain, in Dalmatian inland. It is famous for its two karst lakes, a true natural phenomenon – Blue and Red Lake, often called the “pearls of nature”. Blue Lake is located on the very edge of the town and the Red Lake is located only kilometer away. Blue lake got its name from the color of the water, and the Red Lake from the color of the surrounding cliffs.

Blue Lake – it lies in a deep sinkhole, probably formed by a collapse of an underground cave. The depth from the upper rim is about 200 meters and the dimensions of the lake are 800 per 500 meters. The water depth varies with season, as in winter and spring it can reach the southern rim and during the hot summer days it may completely disappear. When the lake completely dries out, people from the town make an improvised football field and play. The lake is also a popular hiking destination. In the early 20th century, a stone trail descending to the lake was built, so people can easily get down during the summer days, sunbath and swim. The nearby cliffs are perfect as a diving platform, some of which more than 40 meters high. Fortress Topana, built in 10th century, is located on the rock above the amazing Blue Lake, from which you can enjoy an amazing panorama.

Red Lake – just as a Blue Lake, it lies in a deep, roughly circular sinkhole. It is surrounded by almost vertical tall walls from three sides and slanted from the fourth side which collapsed during a destructive earthquake that hit Imotski back in 1942. Red lake is the deepest karst lake in Europe and one of the deepest in the world and it is almost impossible to approach it because of tall stone slopes around it. The depth of the sinkhole is around 500 meters, with a width of 450 meters. The diameter of the lake is approximately 200 meters and the depth is 290 meters. Beside the water lever of the lake, many small caves formed like the Čepitška Cave, with two entrances, one above and one under the water level. The cave is around 67 meters long.  Unlike the Blue Lake, the Red Lake never dries out.

Red Lake is home to some organisms who live only in this lake and nowhere else in the world like the small, 12 cm long fish named Delminichthys adspersus. During dry springs, the fish can be seen in the springs in the area around the lake which is confirmation that the lake has underground connections with these springs.

Other than visiting these amazing lakes, charming little town of Imotski, you can also visit the Green lake, Vrljika river, Basilica of Zmijavci – an important archeological site dating back to 6th century and the Proložac swamp.