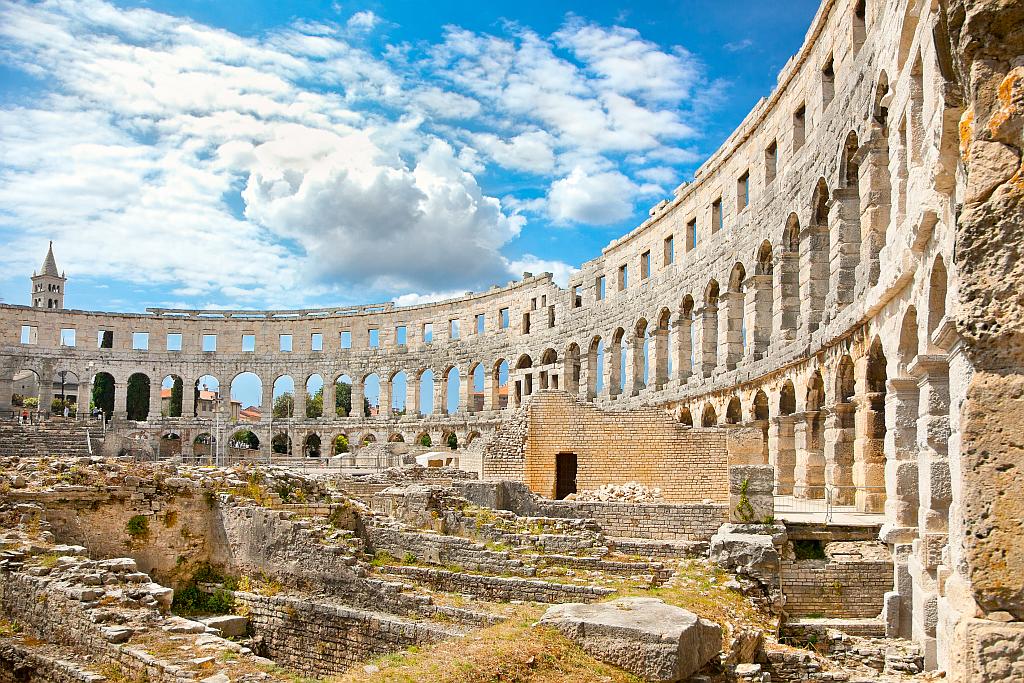 The most important monument in Split is the Diocletian’s Palace dating back from 305 A.D. The Palace was built as a massive structure, with its 200 meters long and 20 meters high walls. It was built for the Roman Emperor Diocletian, as his residence after the retirement. Underneath the Palace, there are Diocletian’s cellars that lead from the Riva waterfront to the Imperial square Peristil, the colonnade ornamented plaza with two sphinxes from Egypt. Peristil also formed the northern access to the imperial apartments and it gave access to Diocletian’s mausoleum on the east and to three temples on the west. An interesting fact is that Diocletian was a great persecutor of the Christians, and over his mausoleum, stands today a beautiful Cathedral of St. Domnius, patron saint of Split, martyred during the persecutions of Emperor Diocletian. Find out more about Split here.

Roman ruins of Salona are located near the town of Solin, few kilometers away from Split. It is a fascinating archeological gem and a great place to visit for all those who admire the history of Roman Empire. Salona was the capital of the Roman province of Dalmatia and at that time it was a populous city, with a population of about 60.000, and it was known as a resort of wealthy Roman citizens.  Here you can admire the remains of the 2nd-century amphitheater, which despite its small size had the capacity of up to 18,000 spectators. The amphitheater was severely damaged by the Venetians during the wars against the Turks, back in 17th century. You will also find the ruins of the Great Thermae, one of the many thermal baths built in Salona in the 3rd century. In the area there are two main aqueducts, one was built for the city of Salona in the 1st century and the other one for the Diocletian Palace three centuries later from the same source which was the Jadro spring.

Burnum was a Roman Legion camp, today it is an important archaeological site located 2.5 km north of Kistanje (County of Šibenik and Knin). Building of the military camp was initiated by the Roman governor for Dalmatia Publius Cornelius Dolabella and continued by Emperor Claudius. The remains include a praetorium, the foundations of several rooms, the amphitheater from the 1st century and the 32 km long aqueduct. Burnum aqueduct – Plavno Polje is an entirely underground aqueduct, so that water stayed cool in the summer and could not freeze in the winter. The aqueduct is around 32 kilometers long with a 170m height difference between the source and the town. It is a live site and the archeologists are still exploring and reconstructing it. You can also visit the museum of Burnum archeological site with the exhibits of the amphitheater, Roman bust and photographed items.

In Zadar, you can admire The Roman Forum, which was a municipal square founded by the Roman Emperor Augustus (built from 1st to 3rd century). There was built a 2-meter high capitol with nearby a temple dedicated to Jupiter, Juno and Minerva, many columns and stone carvings. There is also a monumental Roman pillar used as “the Pillar of Shame” in the Middle Ages, where people who committed some crime were chained and pilloried. Find out more about Zadar here.

The Arena is surely the most famous and important monument in Pula, but in Croatia as well, due to the fact that is is the sixth largest and one of the best preserved Roman amphitheaters in the world. The Arena is the only remaining Roman amphitheater to have four side towers with all three Roman architectural orders completely preserved. It was built in the 1st century outside the old city walls and today it hosts many events such as Film Festival, Opera Season, concerts and much more. So while in Pula, don’t forget to see the unique event Spectacvla Anticva that recreates historical Roman gladiator simulated fights in Arena (Read more about the event here). Admirers of the history of Roman Empire can also visit the Temple of Augustus, constructed between the year 2 BC and AD 14 and situated in the Forum changed its function a few times during the past: first, it was used for pagan ceremonies, afterward as a church and in the beginning of the 19th century it became a museum. Arco dei Sergi, another Roman monument, is a triumphal arch that was originally a city gate, constructed as a symbol of victory at Actium. Roman Floor Mosaic is an impressive floor mosaic that has been found in the remains of Roman houses after the World War II and has been well preserved since then, definitely worth seeing! Find out more about Pula here.